Peace for whom in Tuam? 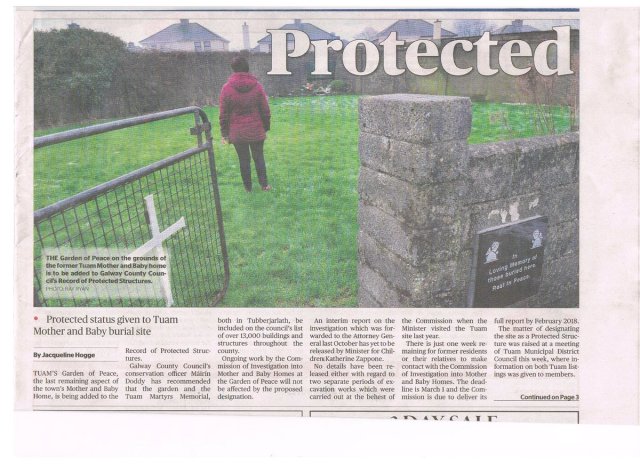 I was confused to read on the front page of the Tuam Herald Wednesday 22nd February that “Tuam’s Garden of Peace, the last remaining aspect of the town’s Mother and Baby Home, is being added to the Record of Protected Structures.”

This site has recently been declassified as a recorded monument from the Record of Monuments and Places, where it had previously erroneously designated as a cillín (a burial ground for unbaptised babies, which this site is not). And now Galway County Council wish to list it as a “protected structure?” What are they thinking?

For families of unaccounted-for bodies of children, this place is a crime scene: not a Garden of Peace. For whom is the intended peace? Peace for the families who anguish for answers in that ground? Or peace for those who wish their whole situation would just go away?

Why do Galway County Council add confusion to a situation that is already an utter mess for anyone involved?

A protected structure: “is a structure that a planning authority considers to be of special interest from an architectural, historical, archaeological, artistic, cultural, scientific, social or technical point of view.”

So what happens at this site depends on point of view – instead of justice? The proposal to designate the site as being of “special interest” is presumably for those who do not have unaccounted-for bodies and missing family.

Part of the wall that currently delimits the burial site, possibly the only part of the enclosure that marks any kind of actual boundary – the modern walls are completely arbitrary – is associated with the workhouse. This is the only above-ground structure that fits the criteria of “special interest” from architectural, historical and archaeological points of view. The burial ground of unaccounted-for children from the Mother and Baby Home does not fit this criteria.

Further, it makes no sense that Galway County Council propose to stamp a “protected” label on a site that they own and have responsibly for, and which is already the subject of forensic investigation by the Commission appointed to investigate Mother and Baby Homes.

According to the Tuam Herald, “the matter will be considered by members of Galway County Council at a forthcoming meeting”.  Councillors ought reach out to those affected by this decision. No family members of unaccounted-for children, and no survivors of Tuam Mother and Baby Home were consulted about the proposal to “protect” a ground where the children are supposed to be buried. Information about the proposal posted in County Hall and Tuam local area office in January and February was not seen by those affected.

Galway County Council did not publicly acknowledge children’s bodies there during works, but quietly built around them and left the site to become an overgrown wilderness. Galway County Council would also do well to come out and apologise to former residents of the Home and their families for their part in cover-up of the burials during building works.

3 Responses to Peace for whom in Tuam?