OK, I am not totally vegan. I am aspirational vegan. I don’t eat meat, and I avoid dairy and eggs: as time goes by it feels more and more natural to me to live without any kind of food from animals, and maybe some day I will eat strictly vegan food and will describe myself as simply vegan.

I don’t eat meat because I lost the taste for it. I can barely tolerate it cooking now.  This occurred in recent years: almost as soon as I got seriously into yoga, here in Wexford. Prior to that I always wanted to be vegetarian: my sister and my mother both are, because they don’t want to eat animals. I also did not want to eat animals, but I was too lazy to learn about vegetarian cooking and had never been exposed to great vegetarian food until I met my yoga teacher.

Suddenly I was craving delicious food like spinach, and aubergines, and asparagus. I didn’t “have” to eat meat anymore to feel like I was having a taste-rich dinner. Hurrah!

Exactly at the time that I was getting into yoga and vegetarian food and not wanting to eat animals anymore, Colm was building up a sheep farm. Suddenly my home was a place where we raised animals for the meat factory.

So it is Colm who is the true sheep farmer. As I’ve written before, (see my blog post about The Raddle and the Ram) the sheep farm started off just with four sheep. It was supposed to be a hobby (I thought). Colm was an archaeologist, remember! I still don’t know where his sheep-farming dreams (and skills, mind) came from. The four sheep became forty sheep and all now have lambs (well, except for one: except for Fairy the sheep. More about her another time).

I now live on a proper, sizeable sheep farm.

At first I ignored it. Even when it got busy, I didn’t hesitate about leaving Colm behind and hightailing to Galway to see my family. “Nothing to do with me, I’m not a sheep farmer, I don’t want anything to do with this!”

But as anyone who knows sheep-farming can tell you, lambing time is a very tiring, intense, and sensitive time. Colm was up to his eyes, supervising healthy new lambs and taking care of delicate arrivals. With a lot of care and vigilance, delicate baby lambs can pull through fine. Without it, they can die.

Last year I realised that if I was around and on board, I could be of help to Colm and to the health of the lambs and their mothers. Colm would go to bed after midnight and set his alarm to get up during the night, so I offered to do the 6AM check throughout the three-week lambing period. From then on throughout the day, somebody, Colm, or me, or the kids, would check the shed every half hour, or any time we went outside.

It became addictive to keep hopping out to the shed just to take a look. This Easter, I didn’t go on my travels to Galway, because it was lambing season. I stayed, and got stuck in. 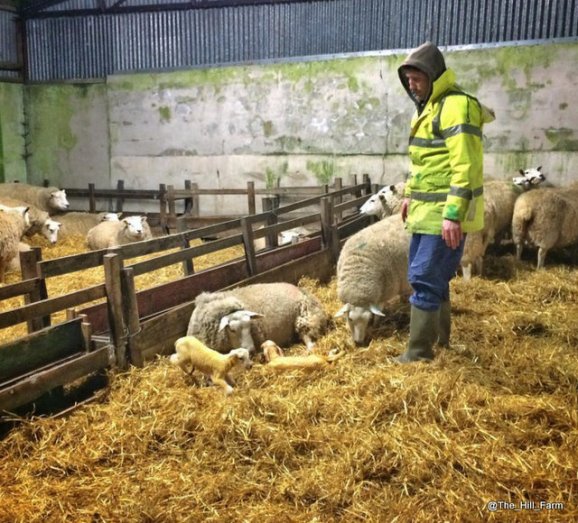 I would find myself wandering out to the sheep shed to be awestruck at a birth happening right before my eyes. I learned to watch for signs that a mother was about to “yean” (give birth, or “lamb”.) I fetched Colm, and watched with him, as he hung back to see if he thought the mother needed assistance, and I held my breath as he stepped in to pull out an unresponsive lamb, only to get it breathing by splashing cold water on its nose, or swinging it carefully to get its lungs working. I began to get the water ready for him ahead of time, and to fetch a basin of clean water and dettol if he needed to assist.

I gasped in delight as I got to carry newborn sticky, yellow, hardy, bleating lambs from the lambing shed to clean pens, the mother trotting fussily alongside. We set down minutes-old new lives onto the straw, their strong legs splaying awkwardly underneath them until they learned how to stand up properly on them, nudging their mothers undersides for the teat.

And I would fuss too, as good as any sheep, over pets who became our charges for hand-rearing.

I cried and cried when lambs died. (I notice I cry a lot on this blog.) A fox took one, a mother sat on one of her triplets, and we lost some weaklings, including two pets (Arabella and Andy.)

I cried more when Colm sold one of our pets to another farmer one day while I was away in Dublin. That farmer’s sheep had lost her lambs, and he hoped to get her to adopt our pet. (Colm had intended to sell two of the pets to him, but he kept one back when I freaked out over the phone).

I came back to the farm and sat with the then-remaining pets (Alfie and Aideen), my head in my hands in the corner of their pen. My eight-year-old daughter looked in over the gate and chided me:

“Mammy, don’t be so upset. Jim Bob needed Amelia more than we did, or his sheep would’ve gotten sick without a lamb to feed!”

She was right. A mother sheep can get mastitis if her lamb dies. It happened one of ours last year. I allowed myself to grieve the little pet we’d nursed to good health, and dried my eyes and got out of the pen to follow my no-nonsense child back into the house.

Three of the pets

My children don’t seem to get so attached as I do: though we were all very upset when Andy died. He was a little darling pet with clubbed feet and couldn’t feed from his mother. He had these woolly long locks on the side of his face which my daughter said made him look Victorian. He had been fine, so fine, but Colm found him unconscious one day when it rained. We massaged him, and warmed him with hot water bottles and the hairdryer, and he came round and bleated and cried out but he never got  well. He died that night.

“You can’t mind them, you just can’t mind them,” my mother lamented to me on the phone when I told her about Andy. Lambs will always die, every year, without warning, she reminded me, remembering to me the casualties we’d had when I was growing up. My sister wrote a poem about the loss of her pet lamb when she was nine.

Oh yes, I grew up with sheep farming. That’s also why I was so sure  that I didn’t want to be a sheep farmer.

It is so rewarding when they survive though. And it is so utterly miraculous to watch them being born! It is joyous to walk among them as the sprock in the field, and it is hilarious to watch them grow into marauding adolescent sheep who travel the field in packs. It is infuriating to have them escape their boundaries to get into our garden and eat our vintage rose bush.

They fill our days with raw delights and raw challenges.

For now they have only just begun to roam a bit more independently from their mothers. Soon they will be teenager sheep, and then towards the end of the Summer they will be quite grown, almost indistinguishable from their mothers but for their junior fleeces, and Colm and his brother will begin to single them out for the factory.

This is the part that my parents and me skipped out of our consciousness when I was growing up. When lambs were being sold, we were told they were being sold to “another farmer”  – usually in Donegal, for some reason. Even now if I speak to my parents about this, they say they didn’t like to think about the truth of where the sheep went to. My mother is vegetarian herself, after all. I think they convinced themselves, not just us, that the sheep went to Donegal.

Colm has no moral quandary: he is what I would describe as a responsible meat-eater. Mostly the meat that is cooked in our house is beef (and some days we all actually eat vegetarian cooking anyway), and he does not divorce his awareness from the animals that this meat comes from (we can get quality local beef from Staffords Butcher Shop and Wilton Mills Farm Foods in Enniscorthy). No sheep meat in this house so far: the factory that will buy our sheep will sell their meat to France.

With his own sheep, Colm is proud that they have a  very good life and are very well taken care of until it is time for them to be called in from the field for good. He genuinely enjoys his time working with them up until this end. 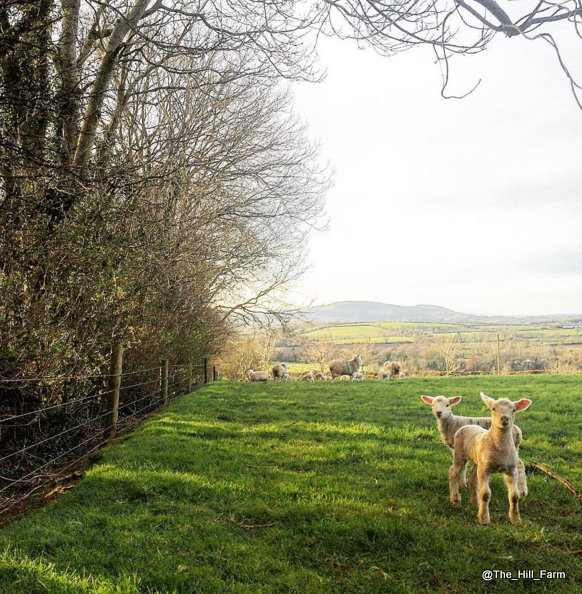 Lambs on the Hill

The sheep have been given a purpose in coming to life here, and I do not deny that their presence is so fulfilling in our lives.

But I stop short at even attempting to consider that age-old ethical question of farming: that if we weren’t raising them for the meat-eaters, they would never have been born.

I can’t easily reconcile that.

On the day that they are grown enough to leave us,  I will climb up on the wheel of the trailer to look in at them, herded together, seemingly clueless about their destiny. All I can do is say farewell and thanks to them for having known them, and Colm will know not to try and reassure me, but will instead join me in a moment of solemnity and gratitude.

I’ll think of their births, their play on the hillside, the challenges and the joy they brought us, and don’t mind me if I cry.

I wonder what would Moby say?

1 Response to The Vegan Sheep Farmer