The Dismaying PR of the Bon Secours

I recently gained a dismaying insight into the style of PR that the Sisters of the Bon Secours are engaging in with regard to the Tuam Mother and Baby Home.  An email written by Ms Terry Prone of the Communications Clinic, representing the Sisters, came to my attention, and is now widely available online – the full transcipt is available here, and you can see it in the image below. It was written in reply to Saskia Weber, who contacted the Sisters in relation to a documentary she is making for French TV about the Tuam babies and all of the mother and baby Homes in Ireland. 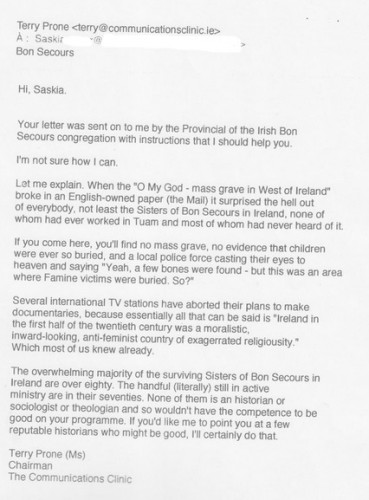 On Tuesday 20th October last, I wrote personally to the Sisters, through their website contact form, to convey my dismay. When my message was sent, a notification popped up on my laptop screen to let me know that I would receive a response shortly.

To whom it concerns

I write to you to convey my great personal dismay regarding an email that I have seen, as written by Ms Terry Prone of the Communications Clinic on behalf of the Sisters of Bon Secours in relation to the Tuam Mother and Baby Home children’s burial ground. The correspondence features an extraordinary falsehood and transmits a dismayingly unprofessional and offensive tone regarding deaths that occurred, and the nature of their final interment, at the facility that the Sisters of the Bon Secours had responsibility for:

I trust you are aware that there are many who suffer now whether due to their direct experience of the Tuam facility themselves, or because they are desperate for information about a child who died there? There are deeply upsetting testimonies on the public record, and many more that are known to my mother (Catherine Corless) who receives, with compassion, hospitality and sensitivity, this suffering in her own kitchen and over the phone as those impacted by the Tuam Mother and Baby Home seek support. What support is provided by the Sisters of the Bon Secours? Does not the beautiful mission of the Bon Secours – “the alleviation of suffering” through the “warmth and hospitality, simplicity and courage” of your work – apply to individuals who have an association with the Tuam Mother and Baby Home?

Rather than provide you with offensive, deflective communications as I have seen in the email by Ms Prone, which compounds the difficulty of those affected, I would have expected that PR guidance would have provided your group with professional support to reach out publicly to all affected, in line with your own mission.  Given its responsibility for the Tuam Mother and Baby Home, and its mission of “good help”, are not the Sisters of the Bon Secours in a significant position to be of particular assistance?

8 Responses to The Dismaying PR of the Bon Secours